On October 8th 1841 the Canterbury Union Bank went into receivership. All three partners were liable for the massive debts estimated at £100,000. (As a comparison, other banks with large debts of £6,000 were  reported as scandalous.) It was a sad end for what had been an established country bank for over 50 years.

The collapse of country banks had begun with the banking crisis of 1825 when bonds issued to the land speculator Greg McGregor panicked the money markets. In fact, the fictitious inventment in South America was not the only cause of the crisis. For years, the financial system had been struggling to manage the enormous debt from the Napoleonic wars. Coupled with the demand for fresh capital to usher in a new industrial era, many bankers were stretched beyond their limits. Some historians claim that without private funding from the banks (and the attendant risks) the Industrial revolution would never have happened.

The Canterbury Union Bank was just one piece in the ‘domino effect’ of failed banks. The result was financial ruin across all classes and new laws were introduced to regulate the issue of bank notes and business practice. No longer could a bank issue notes without approval from the Bank of England and show proof of gold assets to support the issue.  In effect, the Bank of England took back control of the flow of money and became the only authorised authority with the power to nominate a select few banks.

Like most other rural banks, the Canterbury Union had connections with city banks. Deals involved borrowing from the City in order to lend to others and for issuing money notes. (At one point, issuing notes reached such a peak that reports appeared of poor women in villages lighting their fires with pound notes because they were worthless.) 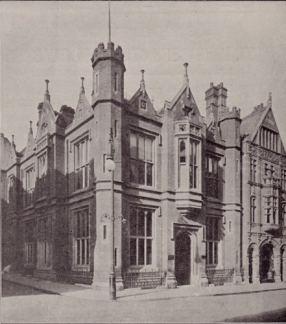 The Union Bank was first established in 1791 and known by that name from 1796. It became a strong and trusted country bank supporting a flourishing Canterbury trade. William Henry Baldock was a partner in the bank from 1831 and the partnership with Richard Halford the younger and Osborn Snoulton the younger started in 1840. The bank collapsed a year later.

Canterbury Union Bank had strong connections with John Perring, Shaw, Barber & Co. in London and it might well be that it was Perring’s misfortunes that contributed towards the collapse of the Canterbury bank.

Perring’s were town bankers for 18 country banks with an impressive line-up of partners that included the richest man in the country, Sir John Perring. (See History of Parliament.)

Sir John Perring, ‘the son of a poor man’, was said in 1800 to be ‘the richest man in the whole court of aldermen’ and to ‘aspire to the honour of a seat in Parliament for the City’. He is described as ‘a gentleman of considerable landed property in Devonshire and engaged extensively in the manufacture of woollens in the neighbourhood of Exeter. The substance of his wealth appears to have derived from his uncle Peter of Membland, who:

went out to India a servant to Sir Thomas Rumbold, and at length became secretary to the government at Madras, where he realized a fortune of £40,000. On his return to England, he married the beautiful daughter of a neighbouring clergyman [Lucinda, da. of Rev. Henry Manning, rector of Stoke-in-Teignhead, Devon], on whom he settled ten thousand pounds; and, in consequence of her extreme good behaviour, intended settling his whole fortune upon her; he died, however, before he could sign his will [8 Dec. 1796].

Perring’s bank, which was said to have ‘formed at one period a considerable connexion in the City’, stopped payment on 21 Feb. 1826, following the failure of the Stock Exchange. The demands of the bank’s creditors ‘could not be satisfied without the sacrifice of Sir John’s fine estates’, and at the time of his death, 30 Jan. 1831, he was living in Burton Crescent, St. Pancras.

In the public notice concerning the closure of the Canterbury Union Bank there is reference to a long term debt that had never been resolved. For some years, William Henry Baldock had been pursuing a debt through the Chancery Court without success and this might well have involved Sir John Perring. 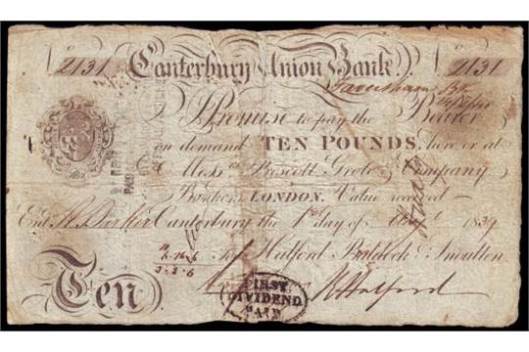 The fall of the Baldock’s fortunes.

Halford, Baldock and Snoulten (more familiarly known as the Canterbury Union Bank) first suspended payment in 1825, but resumed business until its final bankruptcy in 1841. The debts were estimated between £100,000 and £120,000 of which £50,000 were deposits, cash balances on current accounts, and £15,000 notes. The assets were estimated at £60,000. The firm allowed one per cent more interest upon deposits than the other banks in the neighborhood.

The mixed fortunes of the bank are indicated by the public notices that appeared at various times dissolving different partnerships. For instance, on the 11th October 1834 a notice informed customers about the dissolution of the partnership between Richard Halford, William Henry Baldock, Osborn Snoulton Jr. and Edward Kingsford. (Different partners seem to have been introduced in an attempt to inject new capital and fresh thinking.)

The extent of the Union Bank losses were enormous.

To meet the debts William Henry had no choice but to sell Petham House. His financial ruin was too much for this ‘Gentleman of Petham’, widely recognised for his ‘urbanity and integrity’.

On the collapse of the bank and the sale of Petham, William Henry retired from his office as President of the Canterbury Conservative Registration Society and within a short time suffered ‘an attack of paralysis’ from which he never recovered. Although the newspapers were sympathetic to a man they held in high esteem, for William Henry it was an ignoble end.

Halford, Baldock & Co (1790-1841) was established as Baker, Denne, Kingsford, Wigzell & Kingsford by John Baker, John Denne, Sampson Kingsford, (forename unknown) Wigzell, and William Kingsford. By 1796 the firm had merged with Baldock, Ridgen, Halford I Pierce, and was thereafter also known as Canterbury Union Bank. In 1841, when styled Halford, Baldock & Co. the bank failed and on liabilities of £120,000 paid 10s in the pound. London & County Banking opened a new branch in Canterbury shortly after the failure.

Also known as the ‘Union Bank’ or ‘Canterbury Union Bank’.

2 thoughts on “The collapse of the Canterbury Union Bank. The fall of the Baldock empire.”