This post builds on the recent ‘Prisoners of a Propaganda War’ which concentrated on the politics and misinformation concerning prisoners of war and their treatment. Here we look at the first purpose-built detention centre for these prisoners and the impressions of a visitor to the Depot.

When the Royal Navy Transport Board were informed that 4,000 prisoners from the West Indies would be transferred to England, the Board began to search for a suitable site for a new prison. The Norman Cross site was chosen because of its proximity to the Great North Road and London, only 76 miles (122 km) away. It was also deemed far enough from the coast to deter escapes by prisoners, attempting to flee back to France. The site had a good water supply and was close enough to local food sources that could sustain many thousands of prisoners and their guards. Work commenced in December 1796 with much of the timber building prefabricated in London and assembled on site. Five hundred carpenters and labourers worked on the site for 3 months. The cost of construction was £34,581 11s 3d. 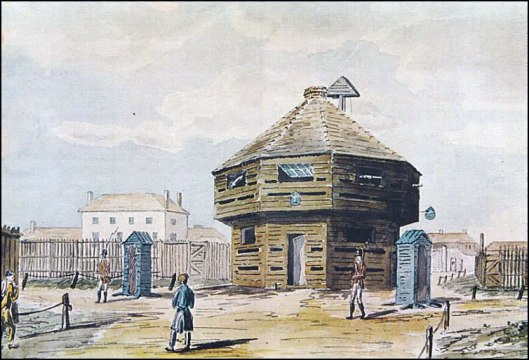 On 25th June 1807, the Reverend Robert Forby, vicar of Fincham, and Mr G. Miller began what we could describe as their Tour of England destined for Peterborough. On the way they visited Norman Cross Depot which had been specially built to accommodate the huge and growing numbers of French prisoners of war. 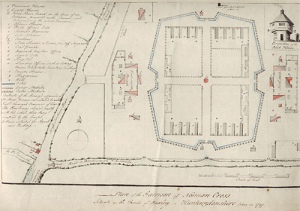 This is how the vicar described his experience:

“Pursuing our journey through suffocating clouds of dust, in the evening we reached Stilton, a miserable shabby town, where all we found to admire was some excellent cheese for our supper. Having disposed of our horses at the inn and secured our own lodgings, we walked back a mile or so to Norman Cross to see the barracks for French prisoners, no less than 6,000 of whom are confined here.  It is a fine healthy spot.  Among them there is very little disease; their good looks in general prove the excellent care taken of them.  In particular the boys are kept apart and taught, so that in all probability their captivity is a benefit to them.  Their dexterity in little handicraft, nick-nacks, particularly in making toys of the bones of their meals, will put many pounds into the pockets of several of them.  We were very credibly assured that there are some who will carry away with them £200 or £300.  Their behaviour was not at all impudent or disrespectful as we passed the palisades within which they are cooped.  Most of them have acquired English enough to chatter very volubly and to cheat adroitly.  They are guarded by two regiments of Militia, one of them the Cambridge; we had the advantage of knowing Captain Pemberton of that regiment, who gave us tea in his luggage-lumbered hut.  The country is under very great obligations to gentlemen of family and fortune who will forego the comforts of home for the miserable inconveniences of barrack service.  We had never seen it before, and have not the least wish to see it again.  It is horrible.  The only privacy of an officer by day or night is in these wretched hovels, in which they must alternately sweat and shiver.  The mess-room is open indeed at all hours.  It is a coffee-room, news room, lounging-room, at all times, as well as that of dinner, to the officers of a regiment.  Between eight and nine o’clock we found two who had outstayed the others; they were boozy and still at their wine, merely perhaps from having nothing to do.  Our friend, who is a man of great good sense and exemplary manners, must be strangely out of his element here.” (Reference: Notes and Queries, 8th series, vol. x., p.197)

It is surprising that the Reverend Robert Forby found the Depot to be ‘a fine healthy spot. Among them there is very little disease; their good looks in general prove the excellent care taken of them…’ As we described in other posts like: ‘Life Inside the Prison Hulks: Staying Alive’ conditions were very different for criminals who suffered deprivations and disease caused by hygiene issues and overcrowding.

Most of the men held in the Norman Cross depot were low-ranking soldiers and sailors, including midshipmen and junior officers, with a small number of privateers. About 100 senior officers and some civilians ‘of good social standing’, mainly passengers on captured ships and the wives of some officers, were given parole d’honneur outside the prison, mainly in Peterborough although some as far away as Northampton, Plymouth, Melrose and Abergavenny. They were afforded the courtesy of their rank within English society. Some “with good private means” hired servants and often dined out while wearing full uniform. Three French officers died of natural causes while on parole and were buried with full military honours. Four French officers and five Dutch officers married English women while on parole. The most senior officer on parole from the prison was General Charles Lefebvre-Desnouettes who resided with his wife in Cheltenham from 1809 until they escaped back to France in 1811.

The freedom of movement offered to higher ranking officers and the trust placed in parole pledges made it relatively simple to contact smugglers and arrange passage abroad. (Men like James Feaste ran a national network for escaping prisoners and favoured remote places like Whitstable to connect with continental Europe.)

The costs of repatriation could be high and when the French ‘King’s Bounty’ was withdrawn in 1758 financial support for prisoners of war fell on the generosity of public subscriptions. The British public raised thousands of pounds to buy clothing and shoes which explicitly linked British superiority to the financial, military and moral weakness of the French state. The French were portrayed as impotent in their ability to fund their own forces but Napoleon realised that the high costs of maintaining prisoners of war was a powerful economic weapon.

The only option was for French families to pay the high price of smuggling their loved ones across the Channel.