The fear of incarceration in a prison hulk was an all too dreadful prospect. It must have haunted the memory of many a criminal awaiting trial, transportation or the prospect of facing a life sentence on board a prison ship.

A distinction needs to be made between hulks used for criminals and those detaining prisoners-of-war.

Between 1793 – 1815 about 200,000 prisoners of war were held on hulks and in depots. During the Napoleonic Wars, French prisoners could be held in prison ships at Chatham, Portsmouth and Plymouth. The living conditions on board the prisoner-of-war hulks were grim but they were also often misrepresented by the French for propaganda purposes and exaggerated by some prisoners to enhance their memoirs. In fact, there are accounts of curious tourists visiting the French prisoners and leaving with a memento of their day such as a carving made by a detainee.

But it was a different story for criminals awaiting transport to America and New South Wales. Here is where the horror stories do emerge.

The hulks were designed to act as a deterrent as well as an attempt to address the overcrowding. They were created following the 1776 statute which ordered that male prisoners sentenced to transportation should be put to hard labour improving the navigation of the Thames.

Aboard the Justitia moored at Woolwich between 1830–1855 prisoners slept in groups in tiered bunks. Each had an average sleeping space of 5 feet 10 inches long by 18 inches wide. Weekly rations consisted of biscuits and pea soup, accompanied once a week by half an ox-cheek and twice a week, by porridge, a lump of bread and cheese. None of the ships had adequate quarantine facilities and there was an ongoing contamination risk caused by the flow of excrement from the sick bays.

During the early years of the hulks mortality rates of around 30% were common. Between 1776 and 1795, nearly 2000 out of almost 6000 convicts serving their sentence on board the hulks died.

In 1777, John Howard (of the Howard League) condemned the whole system as disorganised, barbaric and filthy. He was one of the early reformists and set a wide agenda of changes that needed to take place including the installation of paid staff, outside inspection, a proper diet and other basic necessities for prisoners. But the reformists were not soft. Men like Jeremy Bentham believed that prisoners should suffer a severe regime but it should not threaten their health. The reformers also called for separation of men and women and the improvement of sanitation.

In 1791 the Penitentiary Act legislated that each inmate should get their own cell and that prisons should operate on a silent system with continuous labour. It was to have strong implications on the prison hulks.

In later years, Enquiry Boards investigating conditions aboard the prison ships called on testimonies from the medical advisers to assess poor conditions. Reading through these testimonies we find men like Mr Archibald Robertson, a surgeon, offering a nuanced view of why conditions were so poor.

The range of illnesses and the number of sick prisoners found on the hulks was mainly due to what the prisoners brought with them on arrival.

In January 1843 Mr Archibald Robertson, surgeon to the ‘Fortitude’ convict hulk at Chatham, reported that:

“Although the number of prisoners who have applied for medical assistance has been very great, the causes of their diseases, generally speaking, are not to be attributed to the circumstances under which they are placed in this establishment.

“On the contrary, the remote and exciting causes are to be found in the previous prison discipline, solitary confinement, and low diet of the majority of our Gaols, and which render very many convicts more for an hospital than for dockyard labour.”

Robertson possibly had in mind prisons like Millbank on the Thames built in 1816 in an attempt to improve penal conditions. This prison accommodated 1,200 convicts of both sexes and was run on a ‘separate system’. The building layout was shaped in a six-pointed star round a centre core giving the appearance that prisoners were under constant surveillance. Every prisoner had religious instruction. They would be put to work, turning the crank, picking oakum (unraveling old tarred rope), making shoes or stitching mail bags.

Although Millbank was clean and ventilated, it was still damp and unhealthy because of the location. Fatal outbreaks of cholera occurred. Due to its management regime and architectural design (3 miles of passageways), it was deemed unsuccessful and closed in 1890.

Archibald Robertson is not the only voice sharing the same concerns and conclusions. Another surgeon, Mr Risk working at the Stirling Castle convict hospital, Devonport, wrote:

“The diseases most prevalent among the convicts here are scrofula (swelling of the lymph nodes in the neck caused by tuberculosis), phthisis (tuberculosis), pulmonalis (TB of the lungs and wasting away), synochal fever, ophthalmia, bowel complaints, and catarrhal fever.

“A considerable proportion of the convicts brought to this hulk (Stirling Castle) are originally strumous, so the scrofula is developed in a wide variety of forms, thereby giving to every disease, complaint, and accident to which they may be subjected, the phenomena perculiar to that state or habit of body. 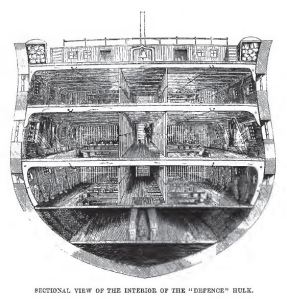 He concludes that a well-regulated, generous diet forms a most essential part in the therapy and treatment of scrofula in goals or hulks; “next in importance to diet are pure air, moderate exercise out of doors, and warm clothing”.

Finally, the surgeon attached to the Warrior convict hulk at Woolwich reported to the Enquiry Board that many prisoners are brought here in a state unfit for embarkation because of disease:

“Many are so enfeebled by the effects of imprisonment they can scarcely support the labour of the dockyard, till their strength has been restored by the cheering influences of regulated association and a solid animal diet.”

All three surgeons highlighted the low standards of health coming from confinement in small, cold or damp cells, poor diet and solitude. (The surgeon working on the Warrior, stated that prisoners kept in isolation and only visited occasionally are prime candidates for chronic illness.) He concludes that:

‘air, exercise, and diet afforded during their stay in the hulks was of great service in recruiting their powers, and preparing them to bear the future voyage.’

The surgeons were pointing the Commission towards a reform of the penal code that would promote the health of the prisoner. It was an obvious conclusion that such a prisoner was more useful and manageable than one who was disabled and would probably die. They were the early voice of the Reformists who lobbied government and resulted in the building of Pentonville, Portland (1848), Dartmoor (1850) and moving towards a colonial style of labour and reward.

These hard-labour ships anchored on the Thames operated mainly on old-fashioned lines in the early years. Money was the only way to relieve conditions and in some cases, buy time.

The prison system was an enterprise. On land, wardens could pay up to £5,000 for the keepership of a large gaol and gaolers operated on a free-enterprise system.

Within the overall land-based prison system everything came at a price and opportunities were not missed on board ships.

We know for certain that gaolers charged for gin, beer, bedding, removal of chains, freedom to walk or live outside of the prison and for food beyond the standard allowance of bread. (In some places like Fleet and the Marshalsea, prisoners had no food allowance at all.) Alehouse keepers or other small businessmen could set up ‘prisons’ which often housed just one or two prisoners. Sheriffs were supposed to inspect conditions but they did a poor job and before the actions of the reformer John Howard, Parliament showed little interest in prisoners welfare and conditions.

There was little choice but to join in the enterprising nature of prison life. As a new prisoner arrived, they had to pay a cash entrance fee called a ‘garnish’. (At Newgate prison this was 5s. 6d. for felons, 2s 6d for debtors.) Fail to pay and you lost your clothes. Even when a prisoner was acquitted they could not leave until they had paid all their fees.

Escaping from the hulks

In one report a group of prisoners held on board the Fortitude at Chatham attacked quarter-master Hillier in a ‘ferocious manner’ leaving him severely wounded on the head. The ‘ruffians’ then seized some oars and dashed for the boat lying alongside the hulk. A violent conflict broke out between guards and the prisoners while other prisoners tried to assist the guards who acted in a ‘very praiseworthy and gallant manner’.

Seven prisoners managed to escape and were pursued by the dock-yard guard and police as well as a crew from the Winchester frigate anchored nearby. Other people in nearby boats who had witnessed the escape also joined in the pursuit but the prisoners had made a good start. They dispersed into the marshes on the opposite shore. The hunt was strengthened by military guards from Upnor Castle and two men were captured. The remaining five succeeded in getting to the fields but were finally caught in a hollow in the woods before they reached Wainscot.

The account ends with the presumption that all who had assisted the guards in their ‘desperate contest’ would no doubt be rewarded.

Attempts at escape became so common that a law was passed forbidding oars and sails to be left in unattended boats.

The better method of escape was to employ local groups willing to take risks and who knew the surrounding areas well. More important, an escape relied on these groups being able to plan to get their cargo safely out of the country.

The Seasalter Company almost certainly traded in smuggling French prisoners abroad using the ‘The Hoy Endeavour’ Inn at Whitstable. It was already established as the local base for planning and coordinating escapes when William Baldock took possession of it. Very often, the families of prisoners would arrange and pay for the venture and because the price was high, prisoners usually came from the wealthier classes.

The revenue from running prisoners was worth the risk if it was well planned and organised. As an indication, in January 1811, five French officers living on parole at Moreton-Hampstead met Richard Tapper who had horses waiting to take them to Topsham on the River Exe near Exeter. They were joined by two smugglers from Cheriton Bishop who, for a down-payment of £25 and the promise of another £250, took them aboard their boat and set sail for France.

Organisation was everything and we know that the hallmark of the Seasalter Company was its ability to organise a free-trade on the North coast of Kent.

2 thoughts on “Life inside the prison hulks: Staying alive.”