One of the remarkable features of the Seasalter Company of Smugglers was their ability to maintain secrecy. Few accounts exist concerning the network’s activities spanning more than 110 years’ (1740 – 1854). Hardly any newspaper reports were published about encounters with local excise and militia; barely a mention made of smuggling around the Seasalter area even though it was the ideal location for landing contraband or stealing prisoners-of-war out of the country. The invisibility of the Company was such that you might question whether such an organisation actually existed but when you research certain individuals – how they lived and made their fortunes – the smuggling network begins to emerge.

What sort of organisation was the Seasalter Company and why did the organisation show such an interest in a remote area Kent, surrounded by marshes and scattered patches of woodland?

Their secrecy owes its success to the dynamics of a ‘fraternity’.

This way of living went beyond the boundaries of work and was a distinctive feature of the dredgermen, oyster farmers and their families living along the North Kent coastline.

Our popular view of smugglers is often sentimentalised, promoted by myth and fiction. There were, indeed, infamous gangs who terrorized areas such as Romney Marshes, but the free trade was often opportunistic. There were also organisations like the Seasalter Company who operated regularly and to a set plan. They relied on cooperation between the investors (usually wealthy middle-classes and gentlemen), local shore men, farmers, and tenants who could navigate remote lanes and tracks. Success depended on local knowledge of when and where newly landed contraband could be landed and stored if necessary. Amongst these people were men who would arrange shipment to the cities – notably Canterbury and London for this part of the country – via lanes and toll roads or using local hoys and other familiar sea traffic to move shipments around the coastline to London.

The coastal families were essential to the Company’s success and well rewarded. Apart from having the boats to bring in the cargo or transport prisoners abroad, these families were part of an intelligence system watching-out for militia, dragoons, excise and revenue officers. Local knowledge of the coastline was invaluable to the organisers of contraband, the guinea-men, and networks that specialised in stealing prisoners-of-war out of the country.

The Seasalter Company had, at its heart, the principles of a fraternity. Members of the Company had family associations (brothers and nephews) that percolated down to the managers of the Company like the King and Hyder families with their own familial links, long-standing connections and loyalty to each other.

These intermediaries with their  connections organised the resources needed to move the goods or people.

The concept of a ‘smuggling fraternity’ would have had a strong resonance with the coastal families who worked the oyster beds as Free Fishers and Dredgermen. Working the oyster beds demanded cooperation and a sense of duty to other members of the fraternity. Under a fraternity, each member and his family was protected and if the fraternity had royal assent their future livelihoods were assured.

Whitstable records dating back to the 18th century describe an organisation that had existed for centuries. Once a year a ‘Court of Fishing and Dredging’ was held ‘under the Hand and Seal of the Steward’ who represented the Lord of the Manor. The Steward would direct the water bailiff to ‘give the orders and decrees for the government of the Company and the oyster industry.

At these courts the freemen possessing boats chose their foreman and deputy to control the day-to-day working of the grounds. Eleven ‘jurats’ were elected to decide working practices of the Company – the buying, laying and selling of oysters and the times of working and taking them to market.

The court was responsible for approving and admitting new freemen: the eldest son of a freeman at 16 and others at the age of 21 after serving a seven-year apprenticeship.

The courts also imposed financial obligations on members. Freemen owning boats paid an annual rent of 20 shillings but this was paid from Company funds (known as ‘the stock’) on their behalf.

To be a working member of the Company involved considerable financial commitment, a bond of £100 for each freeman owning a boat providing a working fund of £1200 – £2000. The money for the bond accumulated over the year by deducting part of the profits from each day’s work. The remaining profits were divided so that two-thirds went to the boatmen and one third to the ‘two shilling men’ or to any man working on behalf of a widow.

Between 22 and 28 boats could average 36 bushels of oysters each over three days with dredging worth £7.4s.0d during the early season. The total weekly income for the Company could comfortably amount to £180.

The Whitstable oyster fleet prospered. In the 1790s there were 70 smacks; by 1850 there were 80 to 100 operating alongside another fourteen market hoys journeying to Billingsgate. Of course, fortunes depended on the spats and the productivity of the beds like all farming experienced good years and lean years. This is where the other benefits of the fraternity resulted in a shared experience and a sense of belonging to a wider community.

The rewards of belonging to a fraternity like the Seasalter Company would have involved a similar sense of collegiate and shared benefits. The difference was that these rewards were significantly higher.

It was probably true that the Company had a recognised and accepted scale of tariffs and rewards. The reason for arguing a set tariff is the way in which the fraternity managed to maintain their trade over so many years. Generations would have grown up in the knowledge of a free trade organisation they could depend upon.

In summary, the dynamics of the Company were like those of the Oystermen’s fraternity. They depended on: 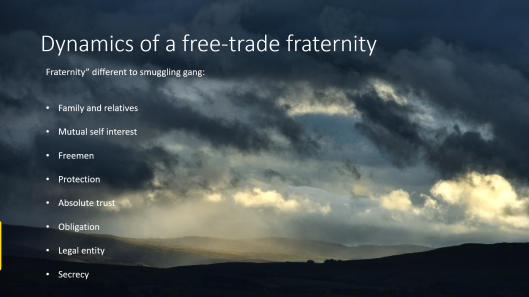 Parallels with the Seasalter smuggling fraternity

In the Seasalter Company, nephews and relations were appointed to various roles including the local clergy and customs services. These appointments supplied intelligence about customs and military movements around the county. Some of the appointments were like apprenticeships. At the end of five to seven years the apprentice would ‘retire’ with a handsome profit and move on to an influential position in towns such as Dover and Canterbury. This pattern of working out an apprenticeship within the Company was a key feature of the Seasalter Company where the Seasalter Parsonage Farm served as the hub for organising activities.

Thomas Patten must take the record for serving the Company. He spent a remarkable 53 years as parson of Seasalter in an appointment that was described as being in a place of extreme aguish.

Richard Hobday Baldock worked as a Riding Officer and retired within seven years to live a gentleman’s life even though the pay of a riding officer was little more than £50 a year which involved the upkeep of a horse.

How widespread was the fraternal model?

It is difficult to say how closely other networks followed the Seasalter Company’s modus operandi. What we can be certain of is that hierarchical structures involving financiers, managers and local communities certainly existed but what seems to distinguish the Seasalter Company is the degree of commitment and sense of duty to the people within the organisation.

One consideration is to make a distinction between guilds and fraternities in 18th and early 19th century England. The Guild focussed on the workplace and trade. Guilds emerged as the forerunners of trade unions and friendly societies and sought to care for their members at a time when there was no welfare state. To some extent, they sought to control their particular industry or craft, limiting entrance into the guild.

The fraternity functioned in much the same way protecting livelihoods, but it had a stronger familial influence. Farming the oysters was impossible without a shared obligation that included protecting all members of the community. Care of the sick, elderly and widows was a key commitment.  (Citations needed)

The only true distinction between a fraternity and any other form of social organization is the implication that the members freely associate as equals for a mutually beneficial purpose rather than because of a religious, governmental, commercial or family bond, although there are fraternities dedicated to each of these fields.

In a similar way, the Seasalter Company worked for a mutually beneficial purpose but it also preserved a commitment to protecting family, extended relations and long-established inter-family connections. It was a commitment and secret that lasted for over 110 years.

1 thought on “Keeping the secret”