The fort and barracks we know today as Sheerness were key defences against overseas invaders. The first structure at Ness Point was built by order of Henry VIII.

In 1665 Samuel Pepys, Secretary of the Admiralty, ordered the construction of a naval dockyard at Sheerness to meet the demand for maintaining and repairing naval ships. Sheerness was to be an extension to the Chatham yards but there were difficulties in attracting workers. Low quality housing and a poor water supply put off many workers and the new dry-dock was not completed until 1708.

As the docks slowly developed, the area grew. Ness Point became an important landmark for the traffic that used the Thames and Medway. It was also significant for the smuggling networks who made use of the Swale and the North coast of Kent. Cargoes landed at quiet places on the Swale and around Seasalter could be loaded onto hoys and make straight for a London quay. Apart from avoiding regular customs patrols, they would have to negotiate Ness Point passing as passenger or cargo boats.

The Seasalter Company probably used the local knowledge and dubious skills available in and around the fort. William Baldock bought a manor house and lands at Scocles, a respectable distance from the fort and barracks but close enough to the sea so it could act as a convenient holding place for cargoes bound for London. (Smallholdings played a key role in the Sesalter Company’s distribution of contraband.)

Bluetown got its name from the small wooden cottages painted with grey-blue naval paint from the navy stores. In 1754, sixteen were built. By 1792 thirty more had been added and as the years went by the ‘Bluehouses’ grew in number. These dwellings became a symbol of resilience and determination in an area that was notoriously poor and deprived.

The Minster Abbey records show christenings and marriages from Bluehouses as early as 1730. Records also show that there were 3 small streets and 455 men living there and on the hulks.

While the Bluehouses provided some accommodation for prisoners labouring as dockyard workers, the majority lived in the hulks positioned to break the flow of the tide in the river. (This reduced the loss of shingle from the foreshore.)

By 1801 four hulks were being used: The warships Edgar, Nottingham, Orford , and Montague. In total, they housed 186 families, including 350 children.

To the outsider, life in Bluetown and around the hulks was dreadful. Fighting, fuelled by alcohol, was widespread. Rumours claimed that every other house was a public house and ever third house a brothel. Malaria carrying mosquitoes plagued the town in the 1760s and sanitation remained a problem into the 19th century.  Theft from the dockyards was a part of life, so much so that at the end of the 18th century workers were prohibited from wearing wide trousers and overcoats. In order to bring some sense of order and control, families who lived in the bluehouses surrounding the fort were forced to move into newly constructed barracks within the naval yard.

Sir Isaac Coffin attempts to bring order to the area.

One of the most formidable administrators was Sir Isaac Coffin and Bluetown would come to detest this dockyard commissioner. Coffin was an oppressive administrator who had little empathy for the communities that had grown up working on the docks and around Bluetown. 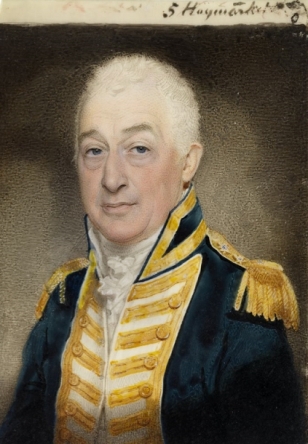 Living conditions around Ness Point would have come as a shock to an officer who had attempted to build a distinguished naval career. Sir Isaac Coffin entered the Navy in 1773 and for the early part of his career spent some time in America. He became a lieutenant in 1764, commander in 1781 and post-captain in 1782. As a volunteer Coffin served under Rear-Admiral Sir Samuel Hood on his flagship ‘Barfleur’, a 90-gun second-rate ship of the line of the Royal Navy, which saw action at the Battle of Frigate Bay, St Kitts during the Anglo-French War.

However, his career was tainted by administrative and legal controversies as well as bad health due to a double hernia. He considered entering the Foreign Service but again, ill health forced him to reconsider.

Coffin was appointed dockyard commissioner at Sheerness in 1799 but first went to Halifax, Nova Scotia for six months. Here, he gained a reputation for being a harsh disciplinarian so much so that his time was described as a ‘reign of terror’.

The same pattern of governance was repeated at Sheerness but he enjoyed the protective patronage of Sir John Jervis (afterwards Lord St Vincent). In May 1804, Coffin was created ‘baronet of the Magdelaine Islands in the Gulph (sic) of St, Lawrence, British North America for his effective and energetic leadership’. He would go on to become a vice-admiral and in 1814 Admiral of the Blue.

During his commission at Sheerness he ordered the demolition of one side of Bluetown High Street in order to make way for a fortified Dockyard wall. This was a direct threat to the way of life for the people in the bluehouses. At the same time, Coffin also started getting rid of the old ships (hulks) used for prisoner housing.

The changes infuriated the local people who had, over generations, built up strong community ties regardless of the severe conditions. There were communities of traders and religious groups like the Jews who had come across the river from Chatham in an attempt to start a more prosperous life. There were ex-prisoners and families who continued to live around the hulks.

How we view Sir Isaac Coffin depends on how we see his situation. He was an outsider with a mandate to establish a thriving dock with strong fortifications. He cannot be described as a tyrant. (The illness – a double hernia – was the result of his attempt to rescue a drowning man.)

Last Will and Testament of William Baldock

6 thoughts on “Welcome to Bluetown: Where every other house is a public house and every third house a brothel.”