They were fast, elegant, reliable and a familiar sight around the North Kent coast, the Medway and Thames Estuary. The hoy could have been purpose-built for free-trading.

From illustrations the early hoys were probably galliot shaped, sloop-rigged vessels and used to transport merchandise – especially cereals, grains and hops bound for the capital, to supply the London food market or the fast-growing export market.

The goods would be carried up the Thames in the coastal craft between London and Faversham, Milton, Whitstable, Herne, and the Thanet ports. It was in these estuary ports, particularly at Faversham, that the Kentish hoy was born. 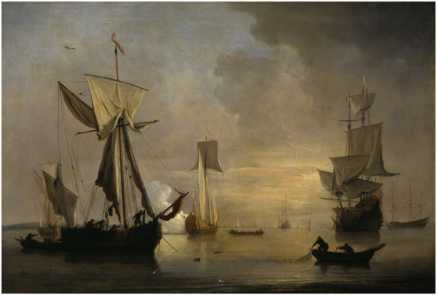 Hoys were among the most interesting of all coastal craft and had to be sturdy enough to weather the oft-times foul weathers of Sea-Reach yet shallow enough to creep up above Queenhithe ; they also had to be fast enough to make regular passages. The cutter-rigged Faversham hoys were “the race-horses of the port.”

Before the era of steam, hoys were small vessels – though there were exceptions – of up to 60 tons. They worked very much like tenders carrying goods and passengers to and from larger vessels, but they also coasted. English hoys were usually single masted with fore and aft sails (unlike the Dutch hoys with two masts).

In the 1580’s Faversham already possessed sixteen hoys, six of which sailed regularly to London with corn. By the early seventeenth century there were eight Faversham corn-hoys, 20 to 30 tons apiece, on the London route. The hoys of the early eighteenth century followed the same cutter-rigged design but were ‘decked-in’–an obvious improvement on the earlier open hold. They were also larger than their predecessors, reaching 6o tons by the 1720’s.

The other coastal location that grew in prominence was Whitstable. The Seasalter churchyard nearby has a tombstone erected by the hoy owner Joseph Talbot in memory to one of his captains, Matthew Legay who died Oct 21st 1753 aged 54 years. 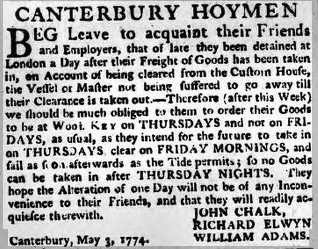 In 1768, hoys sailed by John Chalk and William Philpott were carrying passengers between Whitstable and London for 2s 6d each, while in 1771 John Chalk, John Adams and Richard Ilways stipulated that all goods  must be on board before 9.00am every Saturday. John Chalk’s boat was the Endeavour, and when he retired she was sailed by Robert Laraman. The ‘Endeavour’ was 145 tons and had a crew of five.

There seems to have been nine hoys engaged in this trade at this time. The largest was ‘Stephen and Sarah’, 122 tons with a crew of five, and the smallest was the ‘Delight’, 32 tons, employing a crew of three.

In 1776 W. Baldock comes into the business with his hoy ‘Success’, while in 1782, Stephen Salisbury enters competes for trade with the ‘Providence’. With the advent of William Elve and his ship ‘Mary’, and a partnership between Spencer, Shrubsole and Abbot with the ‘Duke of Cumberland’ in 1794, the London trade was becoming overcrowded. 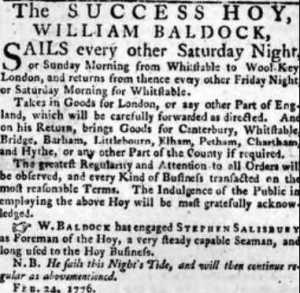 The larger hoys were forced to look further afield. ‘Thomas and Stephen’ with James Randall as master, and ‘Endeavour’, with Robert Laraman the master, engaged in bringing blocks of tin to Whitstable.

With the retirement of James Randall, the ‘Thomas and Stephen’ was taken over by Frend, and in company with T. Fairbrass in the ‘Speculation’ engaged in the wine trade. Meanwhile, ‘Elizabeth and Sarah’ 117 tons with a crew of six, ‘Dredgerman’s Delight’ with James Fairbrass as the master, went over to the coal trade.

The late 1700s saw increasing activity in the shipyards at Whitstable. The most prominent ship builders were John Dobson, Thomas Gann, Jonathan Long-bottom and Augustine Sawyer. A prosperous rope business was in the hands of Richard and George Hayward. Dr Hayward’s father, James Hayward, owned at least seven ships. His Captains were Walker, J Kemp, Griffiths, W. London, W. Greenland, C.W. Carden and Tale. As late as the 1950s the rope factory was still to be seen at the rear of Mr Cheadle’s chemist’s shop.

At the close of the 18th century Whitstable was experiencing an ever increasing number of ships plying their trade. From the clearance records there were 111 outwards, 210 inwards recorded for 1797. There were 72 colliers working in the area and by 1823 the number had increased to 107. For the yawls, a trip to continental Europe was a quite ordinary event. In 1823 they started to go to Jersey for oysters. There were 27 yawls in that year increasing to 34 in 1824. This growth continued until it reached the peak in 1833 when 430 cargoes were unloaded at Whitstable and 288 left the quayside. 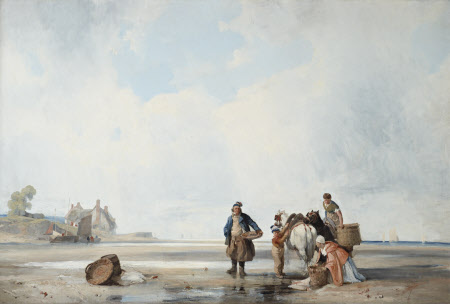 Coastal Scene of Northern France by Richard Parkes Bonnington (Arnold, Near Nottingham 1802 ¿ London 1828), 1826. A wide stretch of sand with a group of four fisher-folk and their two ponies in the foreground on the right; the women are loading basket-panniers onto the ponies and the man holds a basket-tray on his left hip.

On 8 August 1847 a newspaper reported that “On Thursday week, about 1 o’clock a very fine vessel was launched. The vessel was 300 tons burthen and is the largest ever built at Whitstable, named, ‘Mary Ann Gann’.”

Regardless of all this activity at Whitstable, it was Faversham that was the main port for North Kent cargoes destined for London and abroad. Customs and Excise activities, records of inward and outward cargoes were managed by the port authorities at Faversham. Only when Whitstable reached its peak as a commercial port did the authorities feel justified in maintaining a closer presence in the area. We see the customs and revenue appointing more riding officers and landing waiters to the area in an attempt to reduce the free-trade but between these two centres there were the small creeks and inlets, the mud flats and forgotten places like Seasalter that took cargoes quietly in and out of the country for over 140 years and the hoys were just one part of the camouflage that the free-traders made use of along the North Kent coast.

1 thought on “The Faversham Hoy: Everything a smuggling vessel should be.”