In 1750, England was still, predominantly, an agricultural economy. It is estimated that home demand was at least six times more valuable than exporting overseas and the ratio may well have been as high as 32:1 for domestic consumption.

To support this economy North Kent had established one of the strongest distribution networks in the country for farmers needing to get their crops – especially corn and hops – to the London markets. By 1731 Kent accounted for over one third of hop production and was the dominant provider to the Capital.

Although sophisticated overland networks were now available, transport by sea was quicker and preferred, especially for perishable crops. These coastal services became cheaper as more hoys competed for business, and the hoymen of Kent could be particularly competitive. Notices started appearing in news sheets and newspapers attempting to persuade clients about the outstanding service offered by a particular carrier. Some announcements were designed to end rumours and negative criticism that had been directed at certain men. 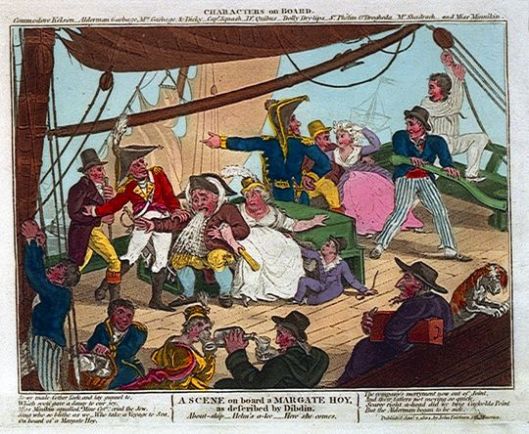 Alongside the marketing and distribution network for crops and other goods, Londoners began using the routes to visit the South Coast towns. In 1726 the ‘Richard and Elizabeth’ sailed from Whitstable every Saturday bound for London and loaded with goods and passengers. Two years later, Henry Hall of Maidstone moved his hoy business to Faversham in order to carry corn, hops, other goods, and passengers to London on alternate Fridays. In later years, we see advertisements from hoymen like John Lockhart of St Peter’s Street, Canterbury, appearing in the May 1769 edition of the Kentish Gazette and announcing:

“JOHN LOCKHART Begs Leave to inform the Publick, that he has taken the OLD KENTISH HOY in HARP LANE, LONDON, which has been fitted up in a neat and commodious Manner, and provides a Number of neat, clean Beds, for the better Accommodation of Persons travelling by the Hoys or Coaches to or from any Part of KENT. He has also taken a fresh stock of Wines, Brandy, Rum, and other Liquors; and provides a good Ordinary every Day at One o’Clock.”

The Old Kentish Hoy in Harp Lane, London appears to have been one of three meeting places used by Mr Lockhart. Over the years, this public house became a centre for Kent hoymen to meet with their London clients and discuss travel or cargo arrangements.

Seven years’ later it would become an equally important client venue for William Baldock who starts advertising his hoy service in August 1776. His advertisements offer a very fine hoy sailing between Wool-Key, London and Whitstable, using Harp Lane as a meeting point to attract ‘Nobility, Gentry and Friends’. 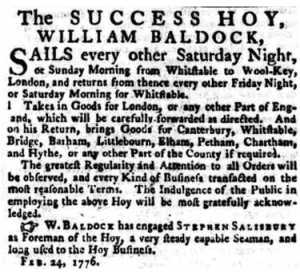 He thanks these esteemed patrons for their encouragement and begs leave to inform them that he has fitted up his vessel, ‘The Success Hoy’ in a complete and elegant manner, with two cabins and a number of beds separate from each other. Mr William has gone to great lengths to attract the very best clientele catering especially for the needs of the Ladies by paying particular attention to such necessary accommodation as the nature of a sea voyage requires.

Knowing what we do about William Baldock it seems something of an irony that he should point out to prospective travellers the need to be careful regarding running goods from one port to another. He hopes that no passenger will attempt to introduce or bring on board contraband goods as such an illegal proceeding will not only subject him to the loss of his ship, but the person (so offending) will need to make good such loss to him, and also attend to the other pains and penalties the law inflicts. Perhaps, in the early years of establishing his sea coast network, the hoys were kept away from the free trade but it questionable.

Sailing between Whitstable and Wool-key, London, every other Saturday night the vessel would have become a familiar sight along the Thames and around the North East Kent coastline.

Mr Baldock closes his advertising with the claim that ‘The Success Hoy’ is the ‘compleatest Hoy for Passengers that has ever yet sailed on the Whitstable Trade’.

For enquiries and booking we are told that Mr Baldock can be contact on board his vessel at Wool-key; or at the Two Bells in St George’s Street, Canterbury; or at ‘The Hoy’ in Harp Lane, London. Here we have the same address as that used by Mr Lockhart.

It is the Harp Lane address that provides the final ironic twist to his advertising. ‘The Hoy’ in Harp Lane was little more than 200 yards from the Customs House, London. Certainly, William Baldock was offering a genuine service to the nobility and gentry of London, but it is what the vessel was doing in-between those fortnightly journeys that leads to a lot of speculation. During the Napoleonic Wars in particular, it would have provided the perfect cover for smuggling prisoners across the Channel where no one would pay much attention to the handsome and high profile hoy Mr Baldock widely advertises to his patrons.

Today, Harp Lane is lost amongst the new City buildings. It is still home to the second oldest livery company in the City of London, the Worshipful Company of Bakers with a history going back more than 800 years and residents of the Lane for over 500 years. But ‘The Kentish Hoy’ where Lockhart and Baldock met their clients came to a dramatic end reported in the Scots Magazine 1806:

‘A dreadful accident happened on the 23rd of September, about four o’clock in the morning, in Harp Lane, Tower Street, London. Two old houses, one the sign of the Hoy public house, and the other a shop adjoining, fell to the ground, and shocking to relate, there were about 30 persons at the time in them, five of whom were killed on the spot…’

Thus ended the rich history of a public house that must have heard some interesting travel arrangements being made by some of the Kent hoymen.