The punitive tax regime that encouraged smuggling at every level of society needs to be seen in context to the size of the debt that Britain was facing. After successive wars with Spain, America and France the National Debt had grown more than five-fold within 80 years. 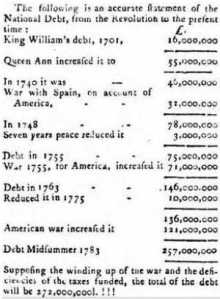 In November 1784 the Reading Mercury published a summary of how the debt had built up between 1701 and 1784.

The cost of the war with Spain and America had seen the debt rise from £46m in 1740 to £257m by midsummer 1783. The Reading Mercury estimated that if the war with America was concluded the tally would stand at £272m.

A succession of prime ministers recognised the growing scale of the problem but it would be Pitt the Younger who worked so arduously at reducing what he saw as a central threat to the nation whilst juggling yet another war, this time with the French.

The Government was so worried and Pitt’s critics so vocal he was persuaded to appoint a Finance Committee similar to the one that had checked overspending during the American war. This Committee would, over the years, document vast sums of money seeping out because of ‘fraud, lack of competitive tendering, a mass of sinecures and fees and an ancient unchecked accounting system hopelessly in arrears’.

Under these circumstances, it is hard to believe that Britain was richer than France and better organised, financially, but that appears to be the case. Attentive housekeeping enforced under Parliamentary power could monitor the accounts of the Treasury, challenge and ask questions.

In an attempt to manage the Debt, Pitt had introduced his ridiculed ‘sinking fund’, setting aside £1 million to invest each year and intended to pay off the Debt. The fund might have worked in peace time but with another costly war came massive costs and more debt.

To find money for the army, navy, armaments and home defence, and for subsidies to foreign allies (Prussia and Austria in particular) Pitt increased taxes and raised loans. The loans were primarily financed through consols ‘consolidated annuities’ paying 3 per cent to investors.

Everything taxable – even the dog

Increased funds also came from a range of new ‘assessed taxes’ on virtually everything Pitt could imagine:

This might have been seen as tax burden on the more wealthy, but there was a real fear that this would reach down to the poor as servants, grooms, carriage makers and farmers lost their jobs and went bankrupt.

In private letters and appeals, we can see families attempting to reorganise their finances to meet the new demands of ‘assessed taxes’. They were also prepared to make sacrifices if necessary in order to meet the new threat appearing across the Channel. The costs of home defences through subscriptions became a cost of living at the top of the household list. In one piece of correspondence we get an inkling of the fear that lay just a few miles offshore:

‘The King of France Louis 16, inhumanly and unjustly beheaded on Monday last by his cruel, blood-thirsty Subjects – Dreadful times I am afraid are approach to all Europe – France the foundation of all of it – The poor King of France bore his horrid fate with manly fortitude and resignation – Pray God he may be eternally happy in thy heavenly Kingdom. And mercy upon his Queen.’

It had not taken long for any supporters of the Revolution to realise that this was a threat to the fabric of British society. The poor had overturned the bastions of power and seized it for themselves. Attempt were made to formulate peace proposals but met with little success. When news of Louis’ execution reached London, Pitt expelled the French Ambassador. On February 1st the Convention declared war on Great Britain and the Republic of the United Netherlands. War had not only been declared, it was at the very doorstep of the country, Pitt would tell the House of Commons eleven days’ later.

Here was a war that needed checking because the principle of what was happening across the Channel ‘threatened the most fatal consequences to the tranquility of this country, the security of its allies, the good order of every European government and the happiness of the whole human race’ as Pitt told the House.

What Britain faced was an enemy with a population twice its size and a new concept in European military development – the first system of conscription where each citizen had to show their loyalty to the Republic.

In theory, also, the financial strengths of France should have outweighed those of Britain, but it was arguably financial acumen that would put this victory decisively in the English camp, even though the cost was enormous.

A tax with a questionable history

‘A new way to pay the National-Debt’ by James Gillray, published April 1786.

The National Debt covered amongst other things, the overheads of the royal household and the cost of wars. These two costs alone had a very mixed reception amongst the public. Satirists like Gillray used it to good effect in their cartoons.

‘A new way to pay the National-Debt’ shows King George III and Queen Charlotte standing before the Treasury, moneybags under their arms, their pockets overflowing and bursting with coins (funds from the Treasury to cover Royal debts). William Pitt with his pockets full of coins, hands the king another moneybag taken from an overflowing wheelbarrow. The Prince of Wales, George IV, stands to the right looking destitute; a quadriplegic sits on the ground to the left with an overturned and empty hat between the stubs of his legs, which are fitted with prostheses. (Library of Congress)

Practically anything and everything now attracted a tax. Imports of course, remained a prime target for increased taxation if only because this was an established practice. However, the double-taxation system (customs duty and excise duty) was seen as particularly cynical and at times, Draconian.

If this was the general sentiment then any announcement of new taxes on imported items was like a shopping list for smugglers. Everyone recognised this and everyone realised what the solution was: End the tax and you end the reason for smuggling but that didn’t solve the estimated £679 million debt mountain that had accrued by the early part of the 1800s. This mountain was more than double the GDP. And the cost of the wars with the French, alone, would top £831 million.

It was the financial inefficiencies of the French, a strong British national output and a well-organised business sector that ensured the military got what they needed. (The various financial collapses of regional banks especially would be another painful financial blow to the moneyed gentry and speculators. It was to be the cause of William Henry Baldock’s retirement from public life despite his many other successes including smuggling. Baldock would retire and become a recluse, still admired by many, but unable to face the public gaze and admiration.)

‘Excise’ was a type of tax on domestic consumption. During the years of the Civil War, it covered many different items. But it was reduced ten years later to cover just chocolate, coffee, tea, beer and spirits. However, it was an effective way of raising tax revenue, so successive governments re-introduced and repealed Excise duty on various items including essentials such as salt, leather and soap. The difference between these two taxes was of little interest to the people, who cared only that what they bought was becoming increasingly expensive.

In the 18th century, extraordinary quantities of goods were smuggled into Britain. At one time it was estimated that at least two thirds of all tobacco consumed in London was contraband.

In some areas, whole communities became dependent on smuggling. Many communities in the late 1700s (such as the Scilly Isles) were in league with the smugglers who could provide contraband goods, such as tea or tobacco, which they could not otherwise afford.

The heyday of smuggling was during the wars against France and Napoleon. After the conclusion of the Napoleonic Wars in 1815 smuggling went into decline. This was accelerated when the preventive effort was stepped up with the introduction of coastal blockades, blockademen and the Coastguard. By the late 1820s, the effectiveness of the two forces was apparent. With the end of the war, the authorities finally had the manpower to patrol and regulate the coast – especially around the Kent and Sussex coastline.

In 1831, the Coastguard Service became responsible for the entire coastline and ultimately becoming the preventive force. The Coastguard drove smuggling underground, but economics finally ended the smuggling era. Britain adopted a free-trade policy in the 1840s reducing import duties significantly, thus making smuggling no longer viable as an occupation. (HM Revenue and Customs)

History of the Revenue and Customs

3 thoughts on “The price of war in Georgian England”