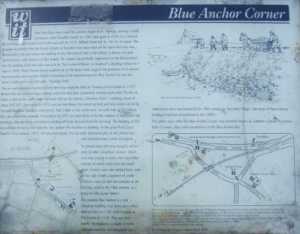 “Near this place once stood the ancient chapel of St Alphege, serving a small settlement called Seasalter Street. In 1481 and again in 1518, it is referred to as being at the eastern end of the sea wall. In 1472, William Smelt left 3s. 4d. for its repair. The popular local belief that the Saxon Church of Seasalter was once sited off the shore here but was destroyed by the sea before the building of the Old Church half a mile inland, is almost certainly derived from a folk-memory of this chapel. The chapel was probably suppressed at the Reformation but the building itself may have survived as ‘The Looker’s House’ (a shepherd’s dwelling) shown in a map of 1693. Many human bones washed out of the beach here suggest the presence of an ancient burial ground, and one-time church ownership of the land between the Blue Anchor Inn and the shore is indicated by its old name ‘Vicarage Field’.

“The sea wall extending westward from here was originally built by Thomas of Faversham in 1325. Before then the marshes were saltings and tidal mud-flats crossed by streams and creeks. In one of these, a mile to the south-west, had been laid up the famous ‘Graveney Boat’, a trading vessel of about 940 A.D. discovered in 1970 over six feet below the marsh surface and now preserved in the National Maritime Museum, Greenwich. Also a mile to the south-west, on each side of the railway line, is several low mounds. Excavations in 1955 revealed these to be the remains of medieval salt workings, the salt being extracted by boiling off brine derived from the sea mud. The building of the sea-wall put an end to this industry, but opened the marshes to farming. In the great East Coast Flood of 31st January 1953, the sea overtopped the sea-wall, destroyed part of the railway line, and drowned many cattle and sheep.

“In former times fish was brought ashore here for the Canterbury market. Much of it was caught in weirs, the carrot-like stumps of which criss-cross the outer mud. Oysters were also landed here, and at low tide, nearly a quarter of a mile offshore, may be seen the remains of an old brig, used in the 18th century as a store for the oyster fishery.

“The present Blue Anchor is a late Victorian building, but there was a Blue Anchor here in 1756, which began as The Crown in 1744. This inn, two nearby farmhouses, a couple of farm cottages, and the ancient parsonage constituted what was known in the 19th century as ‘Seasalter Village’, but most of these historic buildings had been demolished by the 1960s.